Dice and gaming have always existed together, with the vast majority of tabletop RPG’s requiring dice of some variety.  With the board game industry exploding, dice still have a place at the gaming table, being a fairly common feature in a wide range of board game types.  Whether the game has its own custom dice, or uses standard dice, they remain a favorite way to introduce a little randomness and keep the results uncertain. 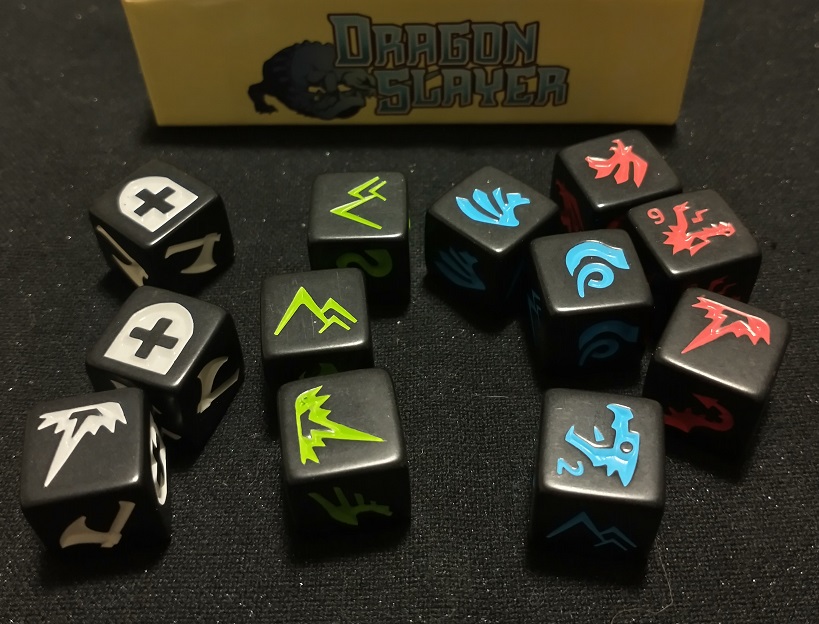 Some of the simplest dice games consist of a handful of dice and maybe a few tokens.  Games like Dragon Slayer are push-your-luck style games that are quick to play, but great for filling small bits of time.  You roll the dice and try to gather points without going bust!

These games don’t require a lot of complicated thinking or strategy, it almost all boils down to ‘roll or don’t roll’, so they are great for kids or newer players, and their portability means they can be tossed in a bag and played almost anywhere. 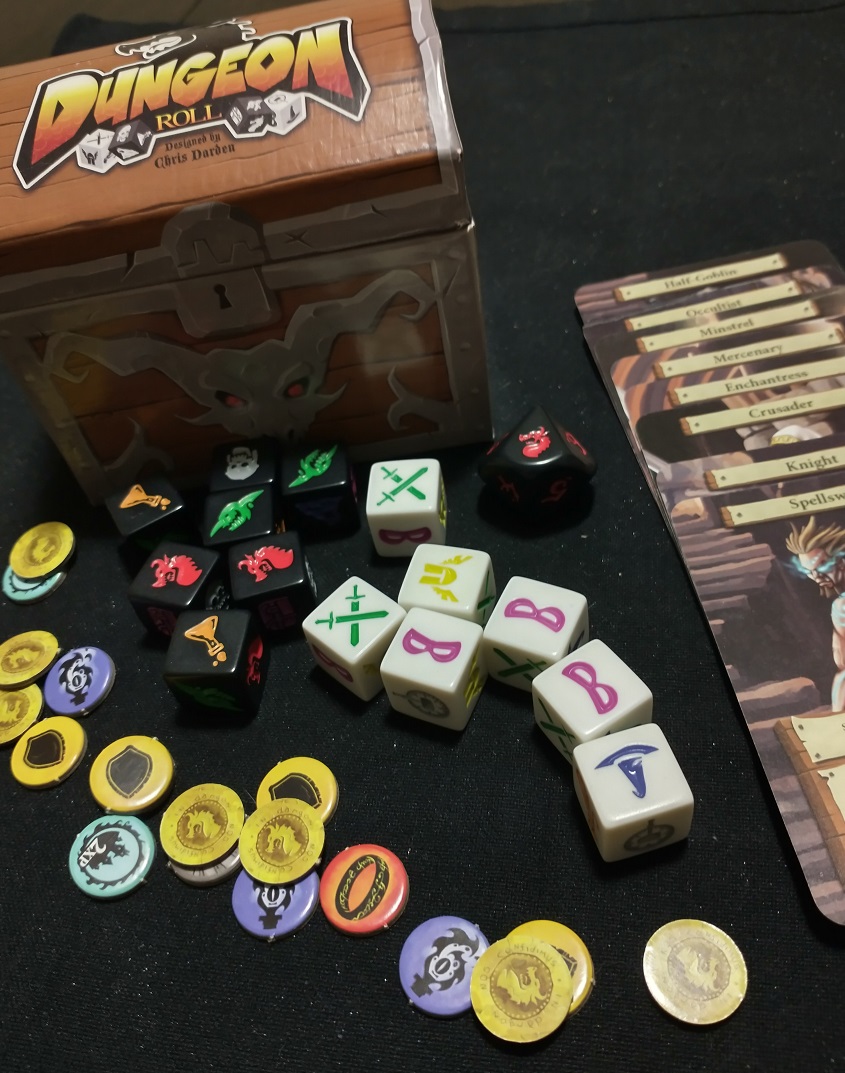 Getting a bit more complicated, many dice games also involve cards and tokens.  In Dungeon Roll, you are an adventurer, delving into the dungeon and trying to make off with the most amount of loot.  But, if you push too far, you can lose it all!

While dice are still the central mechanic of this game, it has cards and tokens that support and modify how you use the dice.  You pick a character, which changes how the dice work for you, and you might find tokens along the way that let you do things besides just rolling the dice.

This adds a layer of strategy, as you are no longer just looking at the dice, but also considering the other tools you have at hand.  It also means that the game has more replay appeal, as you might want to try different classes or hope for a better selection of tokens. 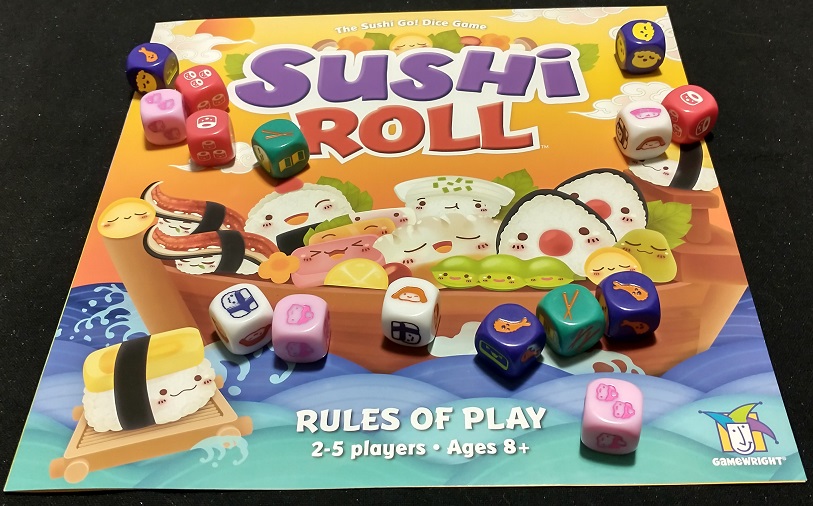 While many simple dice games have players taking independent turns, games like Sushi Roll make the dice usage very social.  In this game, you are trying to build the best meal of sushi, by picking plates (dice) off of the conveyor as it goes around the table.  So you not only have to think about what dice you might want, but also what dice you may not want other players to get!  However, since you roll the dice each time they are passed, you never truly know what your opponent might have the option of taking.

This type of interaction makes the dice game much more engaging for all the players.  It is no longer one person rolling the dice and everyone else watching and waiting for their own turn, but everyone rolling together and having to consider everyone at the table’s choices. 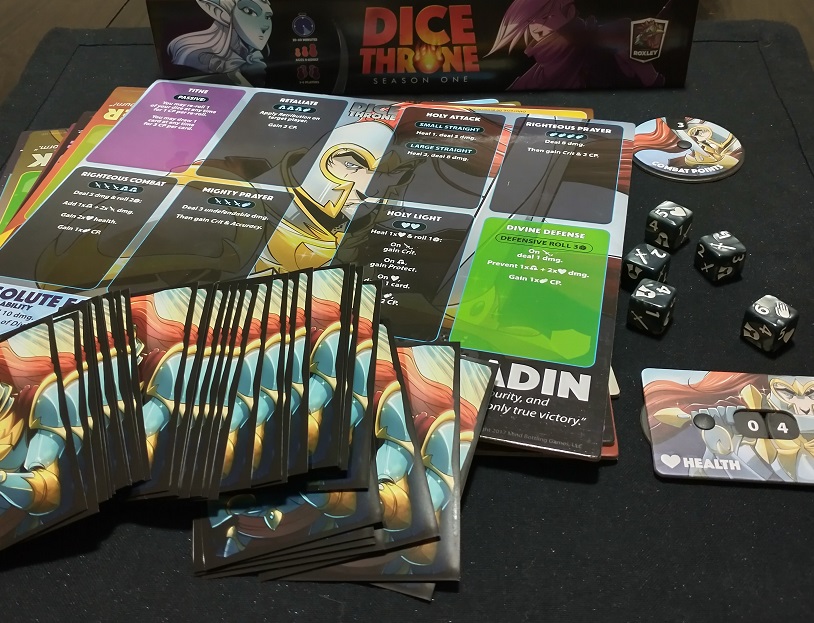 Even old favorite dice games have gotten a face lift.  Dice Throne will feel very familiar to anyone who has played Yatzee, as it uses many of the basic dice mechanics, but adds a lot of new twists and options.  It uses custom dice, which still have the numbers 1-6 on them, but each number also has a symbol (some numbers will share a symbol, depending on what character you are playing).  And you have a board of special ‘skills’ (like if you get matching symbols or a small straight), that let you perform attacks on other players.  Add into that a deck of cards that has upgrades to these character skills and cards that you can play to modify dice rolls or do other things, and you are now playing a game that uses dice rolling as a base for more strategic fights.  It is the combination of dice and cards that make this game shine, as you aren’t always blocked by a bad dice roll…if you planned out your card usage well! 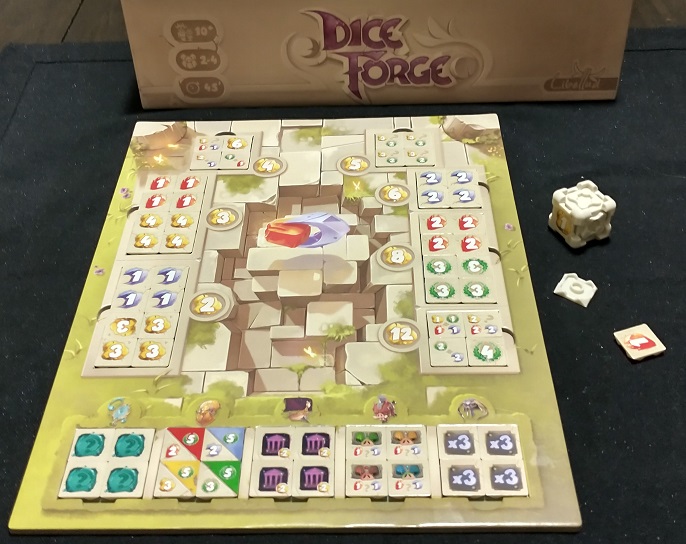 Dice Forge is a really unique way to play with dice, because in this game you not only roll your dice, but you craft them as well!

The dice themselves are built with removable faces, so at the start of the game, everyone has the same two base dice, but as you play, you can buy or unlock different faces to put on your dice.  How you build and manipulate your dice determines how you earn resources and progress.  This game also has a mechanic where everyone rolls the dice to earn resources at the start of each player’s turn, so it keeps you engaged. 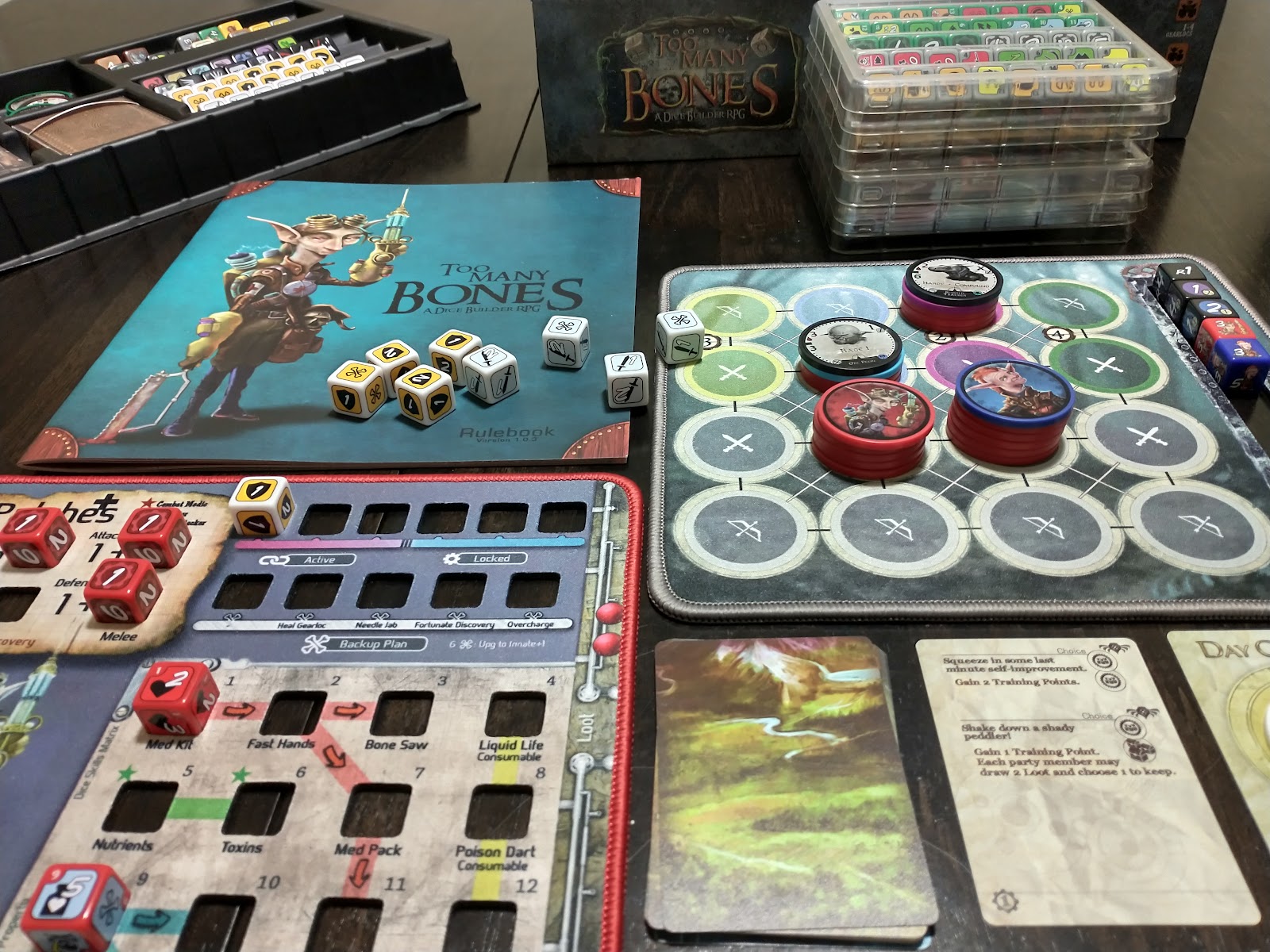 It’s impossible to talk about dice-centric board games without talking about Too Many Bones.  This game has a ton of custom dice, and dice are at the core of both combat and character development.  As your character levels, you can upgrade their stats or unlock new abilities, new dice, for them to use in combat.

Alongside the special, character specific dice, there are general attack and defense dice, that both you and the enemies roll, to determine the flow of combat.  It is highly strategic, as you not only have to decide which way to upgrade your character to fit your personal preferences and your group playstyle, but also how you want to use those skills in combat.  Add in a randomized adventure deck and plenty of different baddies to fight, this game packs a lot of content in! 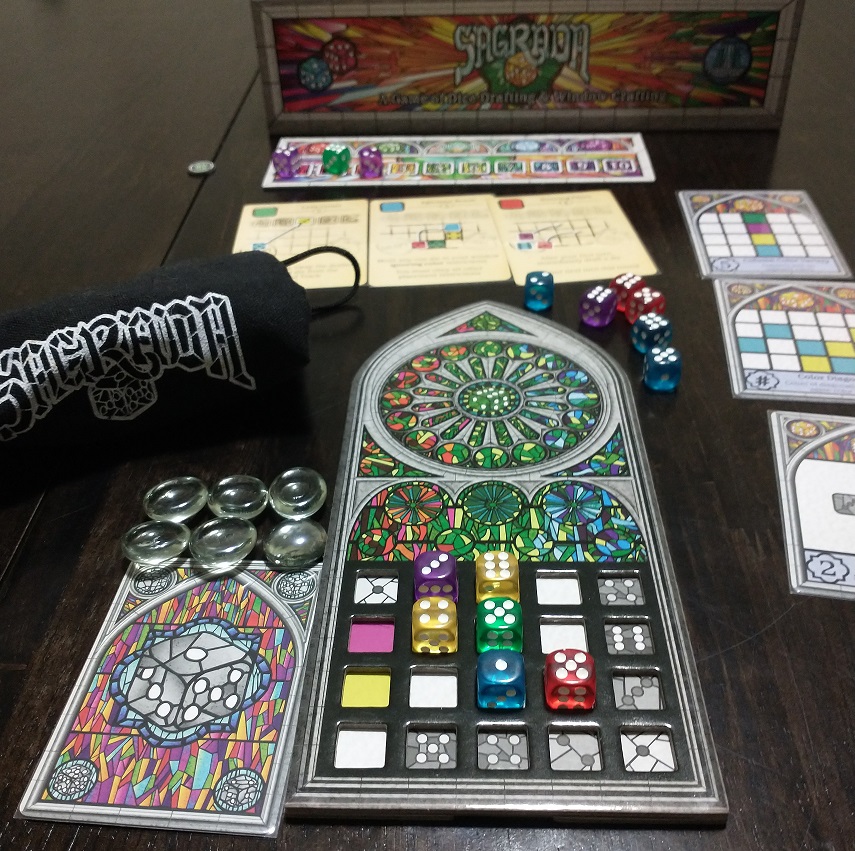 Not all dice games utilize custom dice, but that doesn’t make them any less fun…or gorgeous.  Sagrada is a game all about creating beautiful stained glass windows, and the dice may be ‘standard’ d6’s, but the bright gem tones really fit the game theme well.

This is a puzzle style game, where you are trying to fill in all the spaces on your window tile, without breaking any of the rules.  You can’t place two dice of the same color next to each other, you can’t place two numbers next to each other, and you have to place dice to match what is printed on your window card.  Of course, there are additional twists that are randomized each game, so you may have additional ways to manipulate your dice and allow you to do things that you wouldn’t ordinarily be able to do. 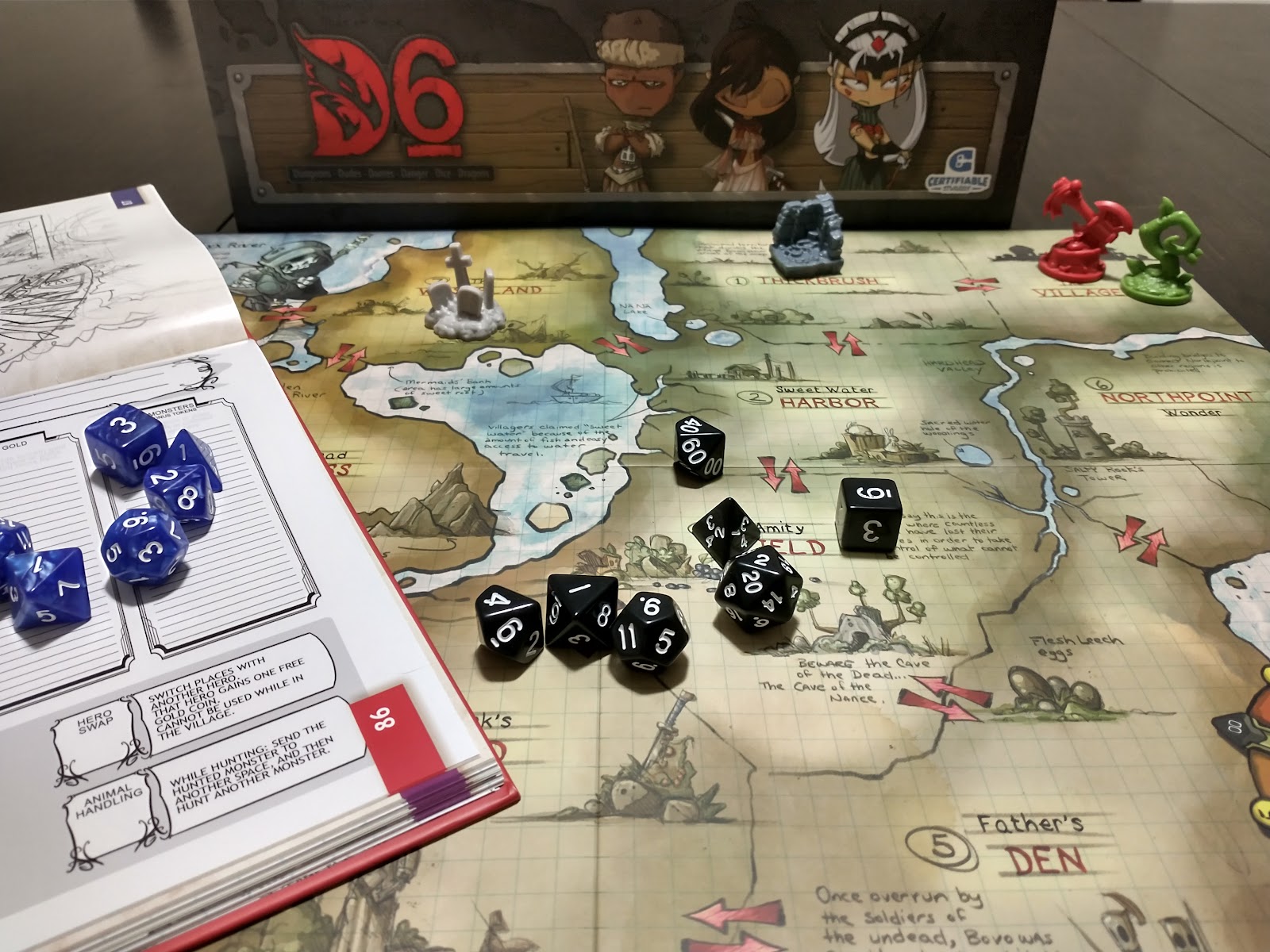 And finally, some board games, like D6 (Dungeons, Dudes, Dames, Danger, Dice, Dragons), use standard polysets of dice.  This means that when you are playing these games, you can substitute in your favorite sets of dice!

D6 may remind you of many traditional tabletop RPG’s, but with a twist!  In this game, the focus is on killing monsters and collecting bounties…all while stopping other bounty hunters (the other players) from making their hunts.  It’s got a great sense of humor, has lots of ‘take that’ mechanics, and the dice give it a good mix of strategy and luck.

No matter what kind of dice a board game uses, the addition of dice adds a level of randomness that makes a game slightly unpredictable.  You never know what will happen when you roll those dice.  Many dice games give you ways to manipulate the dice, so that you can strategically work with what you roll, making those bad rolls just a bit more manageable.  Whether you are drawn to a game because of the unique dice it uses or because you can use your own favorite dice, games are a great way for dice lovers to play with the things they love…and possibly share that love with others as well!